Telecommunications giant AT&T is under fire by privacy advocates this week after recently acknowledging that it will not publicly disclose any of its dealings with the National Security Agency.

Telecommunications giant AT&T has come under fire from privacy advocates after it acknowledged that it will not publicly disclose any of its dealings with the National Security Agency. 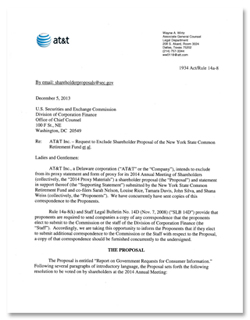 The company claimed that protecting customer privacy is at the crux of its decision not to share government requests in a letter to the U.S. Securities and Exchange Commission.

The letter, right, penned by the company’s legal counsel, is electing that the issue not be brought up at AT&T’s annual shareholder meeting next spring.

Shareholders, along with representatives from the ACLU, have been rallying for the company to publish a transparency report, much like those recently produced by Facebook, Twitter and Google, to clear the air around exactly what – and how much – customer information it shares with the government.

AT&T’s letter however argues that kind of information isn’t anyone’s business, especially its users or shareholders, arguing that it’s “a core management function” and “an integral part of AT&T’s day-to-day business operations.”

It goes on to say that disclosing such information could jeopardize the company’s legal strategy, noting several pending lawsuits that require the company to “provide personal information to other entities, such as government agencies, credit bureaus and collection agencies.”

While the letter more or less wholly rejects the concept of a transparency report, AT&T notes that if it were to produce one, it would be limited to the company’s responses to law enforcement requests for information and not information regarding the government’s surveillance activities.

Verizon and AT&T shareholders issued letters (.PDF) in November asking the companies to “publish semi-annual reports, subject to existing laws and regulation, providing metrics and discussion regarding requests for customers’ information by U.S. and foreign governments.”

Both companies scored poorly on the Electronic Frontier Foundation’s “Who Has Your Back?” report card, issued back in May. The annual report, which culls major communication and social media companies’ stances on data privacy, points out that both companies fail to tell their users about data requests, fail to publish law enforcement guidelines and will not fight for its users’ privacy rights in court.

Meanwhile, public opposition to AT&T has begun to pick up steam in the wake of its stance.

A petition started by the San Francisco ACLU office urging both companies to be more transparent with what it does with user information has gathered nearly 32,000 supporters in the few days since AT&T’s statement.

“We’re working with our friends at SumOfUs to rally thousands of AT&T and Verizon customers and potential customers and prove to these giant telcos that their silence is putting their public image and bottom line at risk,” reads the petition.