Scammers are posing as event organizers in a sophisticated fraud effort.

Burning Man aficionados anxious to get their tickets squared away for the 2020 “experience” should beware: Fake concert organizers are offering passes in what researchers say is a very convincing and sophisticated scam effort.

Burning Man, which bills itself as a “vibrant participatory metropolis generated by its citizens,” is scheduled to happen August 30 – September 7 in Black Rock Desert in Nevada. It attracts tens of thousands of people: Artists, music fans, celebrities, tech enthusiasts, off-gridders, hippies, new agers, old-school punks and more. It features a mix of communal villages, art installations, audio-visual presentations, and of course, setting large effigies on fire.

Tickets are released in stages; snagging one requires pre-registration and luck, as they’re limited. Prices run between $495 – $1,400, with low-income registration available for $210 – and vehicle passes are required on top of that. To boot, no money is exchanged at Burning Man, so participants are expected to bring food, supplies, shelter and anything else they might need – all adding up to a potentially very expensive jaunt indeed.

In other words, getting a ticket is a process and everyone’s looking to save money doing it. While scams looking to prey on fan desperation are common, researchers at Kaspersky said that a new wrinkle has emerged this year.

Fraudsters have set up a fake website (see below) that closely mimics the official Burning Man site, in an effort to fool visitors into thinking it’s the real deal. The cybercrooks have coopted the same colors, fonts and design elements as the real thing, and “it looks real to the untrained eye,” Kaspersky said, in a post this week. Further, “the URL contains the name of the festival — ‘burningman,’ which on its own may be enough to convince the inexperienced visitor of its authenticity.” 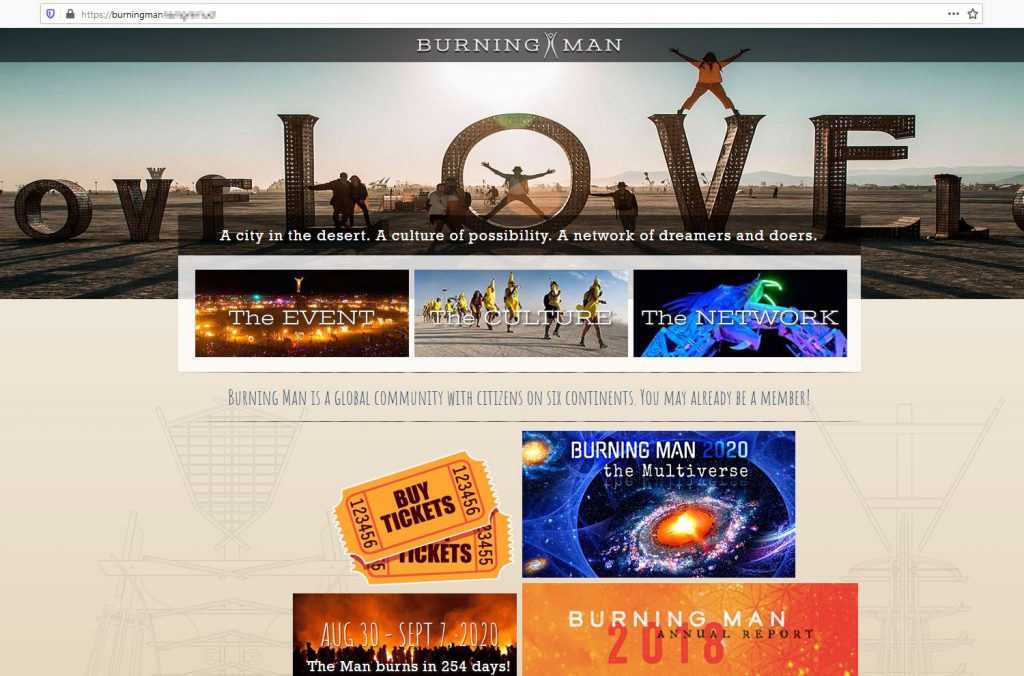 This is the fake Burning Man website’s main page.

The ticket information section is nearly identical to the real site as well – with one crucial difference. Instead of requiring pre-registration, the scammers say that they’re offering tickets immediately – and for only $225.

“To hurry the victim along, the cybercriminals claim that only 300 tickets are left, and that the next batch will appear only a month later and at a higher price,” researchers explained. “The offer promises a ‘GUARANTEED benefit’ of 150 percent, no less, though what that ‘benefit’ might be is left to the reader’s imagination.”

“Unsurprisingly, Burning Man has caught the eye of scammers, and all the more so because tickets are costly,” according to Kaspersky. “The official Burning Man website offers tips about avoiding scalpers and scammers. But that’s for dealing with third parties. A more deceptive scam, one that we recently uncovered, involves scammers pretending to be festival organizers.”

Burning Man fans can avoid being, well, burned, by carefully inspecting any site before entering payment details. Look for multiple pages, for one: Burning Man’s real website has event history, invitation to collaborate, press releases, archives from past festivals, and so on. Googling any special offers or discounts should also yield up not only the official site first, but also information about this and any other scams that might pop up, researchers advised.