Google Play said that app suspensions increased by 66 percent in 2018 on its platform.

Google Play is ramping up its offensive against malicious apps, which have continued to plague the official app store for Android devices over the years.

“These increases can be attributed to our continued efforts to tighten policies to reduce the number of harmful apps on the Play Store, as well as our investments in automated protections and human review processes that play critical roles in identifying and enforcing on bad apps,” said Ahn.

Part of these security measures was the introduction in 2018 of a series of new policies to protect users from new abuse trends. One of those policies restricted the use of SMS and Call Log permissions to a limited number of situations (such as if an app was selected as the default app for making calls or sending texts).

Also in 2018, Google expanded the number of bug bounties available in its Google Play Security Reward Program, in an attempt to mitigate malicious apps.

Yet, despite these policies, Google Play has continued to face a slew of malicious apps that continue cropping up on its platform over the past year.

Still Work to Do 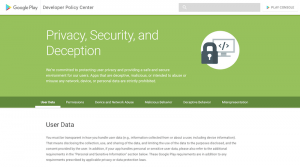 Meanwhile, Android developers still play fast and loose with personal data. A report in April found that millions of apps leak personally identifiable information (PII) such as name, age, income and possibly even phone numbers and email addresses. At fault are app developers who do not protect ad-targeting data transmitted to third-party advertisers.

“App stores have been found to feature malicious apps, as well as legitimate apps that collect user information without user consent,”Usman Rahim, digital threat analyst with The Media Trust, told Threatpost. “Like IoT devices, apps are too often developed without security and privacy in mind. Free apps that feature ads are particularly vulnerable to attacks.”

Ahn noted that 80 percent of severe policy violations are conducted by repeat offenders and abusive developer networks. That means that once malicious developers are banned, they often create new accounts or buy developer accounts on the black market in order to come back to Google Play.

“We’ve further enhanced our clustering and account matching technologies, and by combining these technologies with the expertise of our human reviewers, we’ve made it more difficult for spammy developer networks to gain installs by blocking their apps from being published in the first place,” he said.

We want to know what your biggest #cloudsec concerns and challenges are, and how your company is dealing with them.… https://t.co/2ZeHD1rDwf