Microsoft patched four Windows operating system bugs – all of which are already publicly known or have proof of concept exploits – as part of its June Patch Tuesday security bulletin. Each of the vulnerabilities are rated important and there are no reports of public exploitation for the flaws.

The four bugs are part of a total of 88 vulnerabilities that were patched by Microsoft this month, 21 of which are rated critical, 66 rated important and one moderate.

Raising the most concern among security experts are the four bugs that are publicly known. One of those bugs (CVE-2019-1069) is a Windows Task Scheduler vulnerability affecting Windows 10, Server 2016 and later, according to Microsoft. The flaw, Microsoft reported, could allow Elevation of Privilege on the affected system.

“Public disclosure is an indicator of increased risk,” wrote Chris Goettl, director of product management, security at Ivanti in a written analysis. “This means attackers have had early access to engineer an exploit to take advantage of these vulnerabilities.”

Another bug CVE-2019-1064 is a vulnerability in Windows, which could allow Elevation of Privilege on the affected system. Affected is Windows 10, Server 2016 and later.

The third bug (CVE-2019-1053) is a Windows Shell vulnerability that could also create Elevation of Privilege conditions on the affected system by escaping a sandbox, according to Microsoft. The flaw affects all currently supported Windows operating systems. The last of the four publicly known bugs (CVE-2019-0973) is a vulnerability in Windows Installer that could also allow Elevation of Privilege on the affected system due to improper sanitization of input from loaded libraries.

Security researchers are also flagging three hypervisor escape bugs in Hyper-V. Three remote code execution vulnerabilities (CVE-2019-0620, CVE-2019-0709, and CVE-2019-0722) are patched in Hyper-V that would allow an authenticated user on a guest system to run arbitrary code on the host system, noted Jimmy Graham, a director at Qualys in his Patch Tuesday commentary. “Microsoft notes that exploitation of this vulnerability is less likely, but these patches should still be prioritized for Hyper-V systems.” 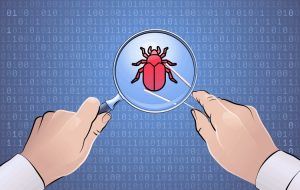 “Given that Microsoft Word Documents are a favorite exploitation tool of cybercriminals, if this vulnerability is reverse engineered it could be widely exploited,” he said.

Also affecting Office are three cross-site scripting vulnerabilities in SharePoint (CVE-2019-1031, CVE-2019-1033 and CVE-2019-1036). “[The] vulnerability exists when Microsoft SharePoint Server does not properly sanitize a specially crafted web request to an affected SharePoint server. An authenticated attacker could exploit the vulnerability by sending a specially crafted request to an affected SharePoint server,” Microsoft wrote of each of the CVEs. A successful exploit of either of the bugs allows an adversary to read unauthorized content, use the victim’s identity to further access a SharePoint site and change permissions, delete content or place malicious context of the user’s browser.

Two moderate vulnerabilities CVE-2019-1040 and CVE-2019-1019 were patched by Microsoft that allowed attackers to remotely execute malicious code on any Windows machine or authenticate to any web server that supports Windows Integrated Authentication (WIA) such as Exchange or ADFS.

According to researchers at Preempt, who discovered the flaws, the two CVEs consist of three logical flaws in NTLM, the company’s proprietary authentication protocol.

Aside from the 88 bugs patched, Microsoft released a number of advisories. Here they are as reported by Qualys: