Cadets from the U.S. Naval Academy have won the NSA’s annual hacking contest for the third time in fifteen years.

Midshipmen from the United States Naval Academy in have won the National Security Agency’s Cyber Defense Exercise (CDX) for the third time.

Between April 13 and 17, the CDX pits the U.S. Naval, Air Force, Coast Guard, Merchant Marine and Military Academy and the Royal Military College of Canada against one another in a hacking contest designed by the NSA’s Information Assurance Directorate. The five-day contest takes place entirely on virtual private networks at a Maryland facility. CDX is part of the NSA’s broader mission to raise awareness about cybersecurity within the military.

Cadets and midshipmen are tasked with defending their own networks, which they designed during the academic year at their respective schools, against attacks perpetrated by NSA security professionals. Ultimately, the goal of the competition is to ensure network stability and operability while detecting, responding to and recovering from a series of compromises.

“CDX is a competition singular in its scope, its execution, and in training opportunities,” said Alex Gates, an IAD senior leader. “It provides to those who are constructing, managing, and defending networks the skills and ability to develop more knowledge in the cyber defense arena. Not only do the students benefit by being on the defensive side, but those who are participating from NSA on the offensive side are also able to share information that can help us, as a nation, better protect our networks.” 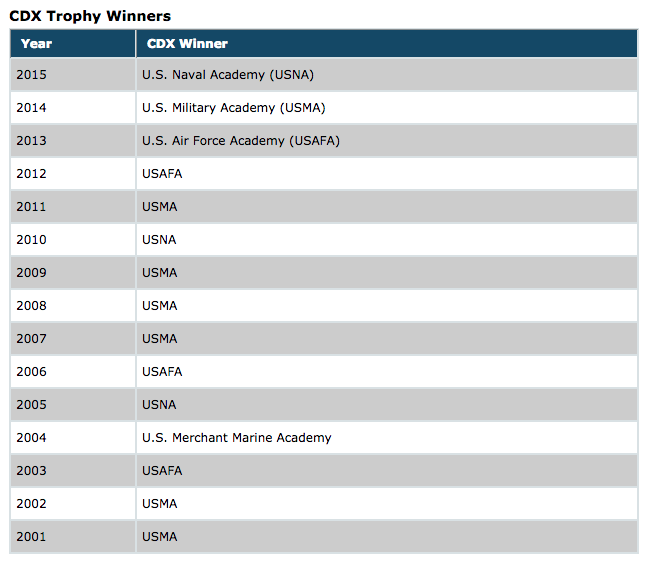 The contest is in its fifteenth year. Historically, West Point cadets have had the most success, winning the CDX trophy seven times since 2001. The Air Force Academy has won the contest four times, Naval Academy has won three times and the Merchant Marines only once.

“It is a competition and it is also an educational experience,” Gates said. “The students competed fiercely for the trophy and the bragging rights for their institutions. CDX is one of the longest-running events of its kind. It has, as such, been an inspiration and model to many in the academic and private sectors.”