Nvidia’s graphics driver (also known as the GPU Display Driver) for Windows is used in devices targeted to enthusiast gamers; it’s the software component that enables the device’s operating system and programs to use its high-level, gaming-optimized graphics hardware.

One of the vulnerabilities, CVE-2020-5962, exists in the Nvidia Control Panel component, which provides control of the graphics driver settings as well as other utilities installed on the system. The flaw could allow an attacker with local system access to corrupt a system file, which may lead to DoS or escalation of privileges, according to Nvidia’s Wednesday security advisory.

Another vulnerability (CVE‑2020‑5963) exists in the CUDA Driver, a computing platform and programming model invented by Nvidia. The issue stems from improper access control in the driver’s Inter Process Communication APIs. It could lead to lead to code execution, DoS or information disclosure.

Various drivers are affected for Windows and Linux users, including ones that use Nvidia’s GeForce, Quadro and Tesla software. A full list of affected – and updated – versions are below. 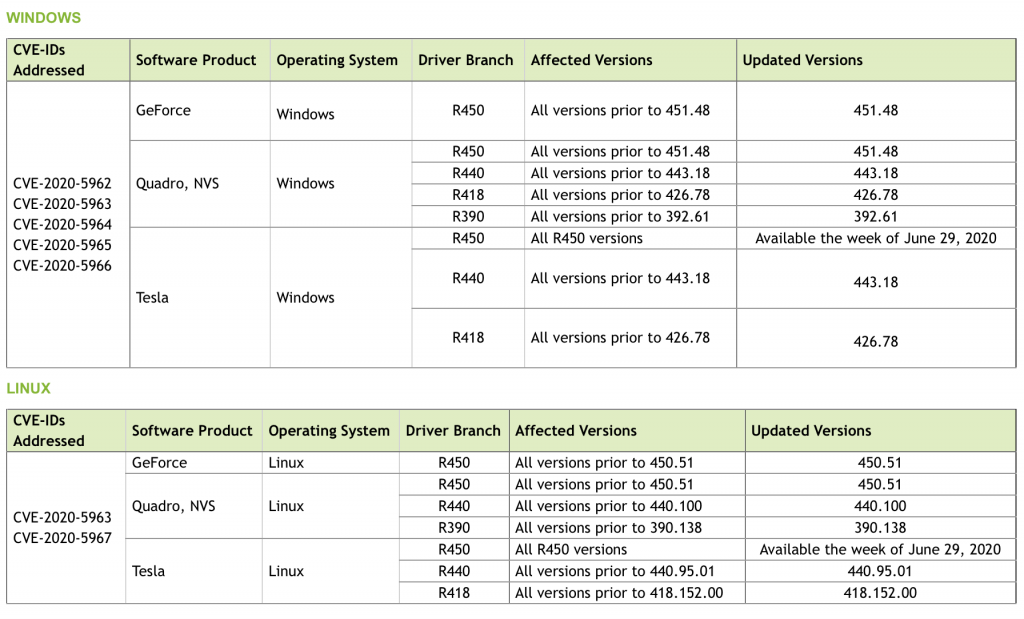 In this case, the software does not restrict (or incorrectly restricts) operations within the boundaries of a resource that could be accessed by using an index or pointer, such as memory or files. That may lead to code execution, DoS, escalation of privileges or information disclosure (CVE‑2020‑5968), warned Nvidia.

The final vGPU flaw (CVE‑2020‑5971) stems from the software reading from a buffer by using buffer access mechanisms (such as indexes or pointers) that reference memory locations after the targeted buffer. This could lead to code execution, DoS, escalated privileges, or information disclosure.

It’s only the latest slew of patches that Nvidia has issued. Earlier in March, the company fixed several high-severity vulnerabilities in its graphics driver, which can be exploited by a local attacker to launch DoS or code-execution attacks. Last year, Nvidia issued fixes for high-severity flaws in two popular gaming products, including its graphics driver for Windows and GeForce Experience. The flaws could be exploited to launch an array of malicious attacks – from DoS to escalation of privileges. Also in 2019, Nvidia patched another high-severity vulnerability in its GeForce Experience software, which could lead to code-execution or DoS of products, if exploited.