“Nuke Bizzle” faces 22 years in prison after brazenly bragging about an identity-theft campaign in his music video, “EDD.”

Rapper Fontrell Antonio Baines, who goes by the stage name “Nuke Bizzle,” made his first appearance in U.S. District Court in downtown Los Angeles on Friday after being charged with fraudulently applying for more than $1.2 million in jobless benefits under the Coronavirus Aid, Relief and Economic Security Act (CARES Act), according to a statement from the U.S. Attorney’s Office in the Central District of California.

Prosecutors claimed he used the names of identity-theft victims to get debit cards issued and mailed to various addresses in the Beverly Hills and Koreatown neighborhoods of Los Angeles, the statement added.

He is charged with three felonies: Access device fraud, aggravated identity theft and interstate transportation of stolen property. If convicted of all of them, Baines would face a statutory maximum sentence of 22 years in federal prison.

Authorities were tipped off to the scheme after Baines posted a music video on YouTube and Instagram titled “EDD,” an apparent reference to the state unemployment agency.

In the video, posted on Sept. 11 and also featuring rapper Fat Wizza, Baines brags about “my swagger for EDD,” and holds up a stack of envelopes from the office, adding, “You gotta sell cocaine, I just file a claim.” 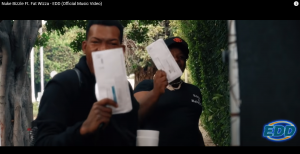 Apparently, the video’s disclaimer that “this video was created with props and was made for entertainment purposes only” wasn’t enough to dissuade authorities from taking a closer look at the ode to EDD.

An investigation by the U.S. Department of Labor Office of Inspector General, the U.S. Postal Service, the IRS and California Employment Development Dept. found that Baines allegedly accessed more than $704,000 through 92 debit cards issued by EDD, with more than $1.2 million in benefits available. The statement added the money was used for cash withdrawals and purchases, including in Las Vegas, where Baines was arrested on Sept. 23.

At the time of his arrest, Baines was reported to have been holding eight debit cards issued under seven separate names.

Rampant fraud directed at the CARES Act and COVID-19 relief has been going on since the more than $2 trillion economic assistance bill passed on March 27 to aid families and businesses impacted by the pandemic.

In April, the Small Business Administration (SBA) was breached, exposing the information of 8,000 businesses which had applied for loans to weather COVID-19, including Social Security numbers, Tax ID numbers, financial information and much more.

BEC attacks typically involve a scammer impersonating a trusted source from within a company, with the intention of tricking someone to wire money or share other sensitive data.

Overall, the CARES Act has driven a sharp uptick in phishing and other schemes to get ahold of American taxpayer data and an easy payout. Secureworks CTU reported in May seeing ads with phony tax forms to trick users out of their information, as well as emails impersonating the IRS to “confirm” information to receive stimulus payments.

Baines put out a video bragging about the alleged crime and showing how it worked. But as the case works its way through the courts, a reminder from the U.S. Attorney’s office reads, “Every defendant is presumed innocent until and unless proven guilty beyond a reasonable doubt.”