During the COVID-19 pandemic, cybercriminals have profited with “increasingly advantageous positions to benefit from the disruption,” said researchers — and this has also been reflected on underground markets, where new services like targeted ransomware and advanced SIM swapping are popping up.

“As a result of COVID-19 and associated global trends, demand for malicious and illicit goods, services and data have reached new peak highs across dark web marketplaces (DWMs),” said researchers in a Friday analysis. “Flashpoint has also observed what can only be described as impressive, shrewd innovation throughout the cybercrime ecosystem.”

While payment cards are sourced from online transactions and include card number, expiration date and cardholder name; dumps are usually sourced from malware-infected or skimmer-infected point-of-sale (PoS) terminals, and include magnetic strip track data. 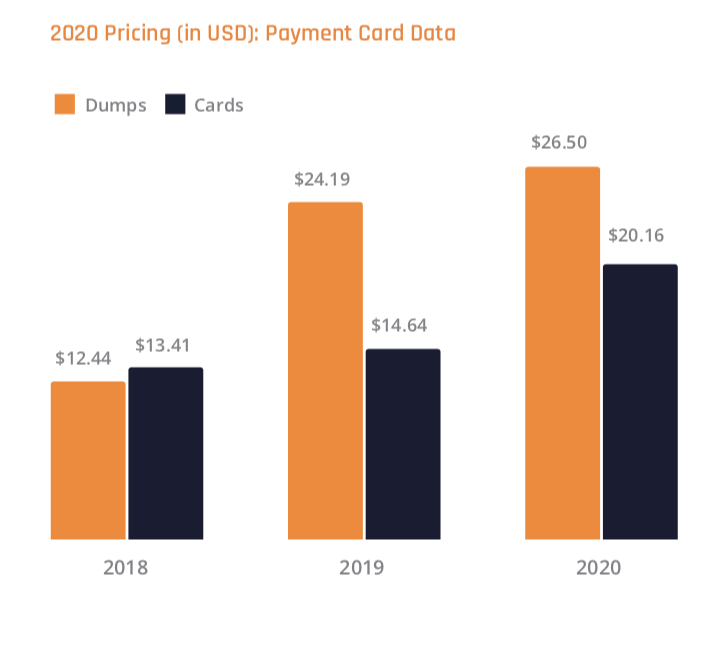 Researchers said that payment-card data pricing varies and is typically influenced by “freshness” (i.e., how recently the data was sourced), country of origin, availability of track 1 and track 2 magnetic strip data and expiration date.

Microsoft’s proprietary Remote Desktop Protocol (RDP), used to enable system admins to remotely connect to corporate machines, as well as for server updates, continues to be a cybercriminal favorite. 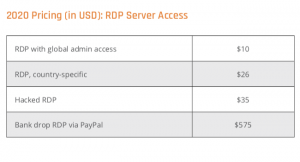 RDP listings continue to grow in popularity throughout the cybercriminal ecosystem, said researchers. A successful RDP attack is lucrative for cybercriminals as it would give them remote access to the target computer with the same permissions, and access to data and folders, that a legitimate user would have.

Researchers noted that 2020 listings for RDP server access are less specialized, and cater to a broader audience. This can include packages that typically provide multiple RDP access options in one bundle.

Meanwhile, DDoS-for-hire pricing appears to be on the rise since 2017, said researchers. DDoS-for-hire, known as “booter” services, make it easy to carry out DDoS attacks, flooding targets with internet traffic to overwhelm a site or IP address and eventually knock it offline. 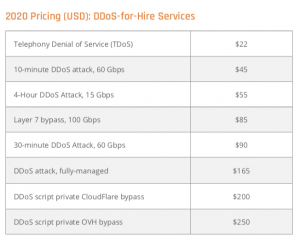 “First, taking down bigger websites must be custom-crafted due to improvements in DDoS protection offerings and widespread use of content distribution networks (CDNs), which are beyond the skills of all but the most advanced bot herders,” they said. “However, there are still instances where threat actors can successfully target larger websites, such as the takedown of Wikipedia via a DDoS attack in September 2019.”