The Iranian hacker group is targeting universities in 12 countries.

The Silent Librarian campaign has re-emerged for the fall school session, actively targeting students and faculty at universities via spear-phishing campaigns.

The threat group (also known as TA407 and Cobalt Dickens), which operates out of Iran, has been on the prowl since the start of the 2019 school year, launching low-volume, highly-targeted, socially engineered emails that eventually trick victims into handing over their login credentials. The goal is to harvest not just logins to sell online, but also proprietary university research and data, researchers said. 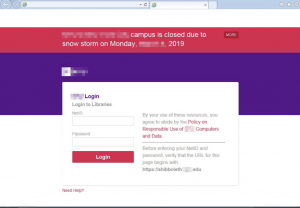 An example of a Silent Librarian phishing portal. Source: Proofpoint.

The emails typically masquerade as messages from university library systems or other on-campus divisions. Over the course of the last school year, the cyberattackers honed their efforts, and began using shortened URL links in their phishing emails, which make it more difficult to detect that victims are being redirected to an attacker-hosted landing page. The attackers also revamped their landing pages with new university-specific banners, based on weather alerts or emergency notifications, to make them look more authentic.

The modus operandi seen last year remains in place, with Silent Librarian hosting a series of phishing sites that are built to mimic legitimate university domains. For instance, emails purporting to be from the University of Adelaide Library directed victims to a “library.adelaide.crev[dot]me” URL, which is very close to the legitimate “library.adelaide.edu.au” domain of the school.

“Many of these have been identified and taken down, [but] the threat actor has built enough of them to continue with a successful campaign against staff and students alike,” according to the analysis. “Clearly we only uncovered a small portion of this phishing operation. Although for the most part the sites are taken down quickly, the attacker has the advantage of being one step ahead and is going for many possible targets at once.”

The APT is using the Cloudflare content delivery network to host most of the phishing hostnames, in order to hide the real hosting origin.

“However, with some external help we were able to identify some of their infrastructure located on Iran-based hosts,” researchers noted. “It may seem odd for an attacker to use infrastructure in their own country, possibly pointing a finger at them. However, here it simply becomes another bulletproof hosting option based on the lack of cooperation between U.S. or European law enforcement and local police in Iran.”

In March 2018, nine Iranians were indicted by the U.S. Department of Justice for conducting attacks against universities and other organizations with the goal of stealing research and proprietary data. The Silent Librarian attacks are likely part of the same ongoing effort, according to Malwarebytes.

“Considering that Iran is dealing with constant sanctions, it strives to keep up with world developments in various fields, including that of technology,” the researchers added, noting that as such, these attacks represent a national interest and are well-funded. “IT administrators working at universities have a particularly tough job considering that their customers, namely students and teachers, are among the most difficult to protect due to their behaviors. Despite that, they also contribute to and access research that could be worth millions or billions of dollars.”