By combining threat hunting and threat intelligence, companies can discover and deal with vulnerabilities in their networks to improve overall data security.

No big surprise here: cybercrime will keep causing a major slowdown in the years to come as the business world proceed with digitalization. Despite implementing all traditional measures to stay protected, organizations keep falling prey to impersonation, phishing, and malware.

Scary enough? What’s worse is that cyber threats are getting more and more harmful. Just over the past two years, Business Email Compromise scams (BEC) alone have led to losses close to $13 billion. In the meantime, the monthly rates of new malware development doubled in 2018.

Are companies constantly unprepared? Or do they painfully struggle to keep up? To remedy this alarming situation, cybersecurity professionals are turning to new approaches such as threat hunting to defend themselves against cyber risks.

We have prepared an extensive guide on the subject titled Threat Hunting for Professionals: The One-Stop Guide to Get Started and summarized some of the key points and questions discussed in this post.

So, What Is Threat Hunting Exactly?

Threat hunting is the process of proactively searching and discovering cyber threats — regardless of whether they pose as yet unexploited network vulnerabilities or have already bypassed defense solutions.

It begins with developing hypotheses about where cybercriminals might strike and which behavioral techniques they could use. During the process, threat hunters use threat intelligence to recognize gaps in their cybersecurity walls and carry out the necessary actions to protect their systems.

How Does Threat Hunting Work in a Nutshell?

There are several steps involved in the practice of threat hunting — including preparation, hypothesis creation, pattern validation, discovery response, and knowledge sharing.

More specifically, threat hunters must be equipped with relevant threat intelligence data before they can proceed. Once this has been secured, they can move on to develop theories and ask questions such as “which areas have the highest probability of being targeted?” and “what methods could attackers possibly use?”

The third step in the process is about verification, wherein the hunters search for a connection between threats and the generated hypotheses. During this stage, some hypotheses may be rejected in favor of others.

When there is a match between a hypothesis and an actual threat, the last two steps involve acting upon the findings such as sending out a team to resolve the issue and sharing all acquired knowledge as part of the company’s security awareness plan.

How Can Threat Hunting Be Effective?

Threat hunting is a demanding process. It requires having a practical understanding of cyber-threats, strong critical thinking, and problem-solving skills together with technical expertise. And to be effective, threat hunters will need to implement best practices among which:

Making the most of threat intelligence data from various sources is an essential aspect of threat hunting. Such information plays a significant role throughout the process, equipping hunters with indications of oncoming and existing threats as well as the perpetrators behind these acts.

Although several methods exist in order to obtain threat data, a common way to get access to insights is collaborating with intelligence providers such as Threat Intelligence Platform and Whois XML API.

But how does the use of data can support threat hunting efforts? Take a professional who is tasked with identifying other domains linked to a malicious website or IP. What that person can do is retrieving a list of addresses connected to their target and possibly blacklist them or compile a database for further investigation.

Comprehend the mindset of a cybercriminal

To come up with plausible hypotheses, a threat hunting team has to understand the reasoning of malicious individuals. This is vital because it becomes the basis for predicting what they plan to do and through which access point.

To start thinking like them, hunters need to know the attributes that characterize a competent cybercriminal. These actors are highly intelligent and skilled in what they do. They take risks and tend to be good at manipulating people to gain access to sensitive information.

That’s why it’s crucial to leverage quality data from various resources such as firewalls, end-point logs, and DNS information to understand the present cyber-threat landscape to be able to uncover system weaknesses and nefarious deeds.

Malicious actors are constantly devising new ways to breach cybersecurity defenses. Unfortunately, not a lot of organizations today are equipped or agile enough to handle their attacks.

By combining threat hunting and threat intelligence, companies can discover and deal with vulnerabilities in their networks to improve overall data security. This proactive approach can also be used to locate threats that have bypassed existing protocols and act against them accordingly. 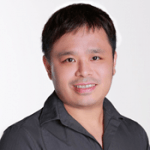 Jonathan Zhang is the founder and CEO of Threat Intelligence Platform (TIP) — a data, tool, and API provider that specializes in automated threat detection, security analysis and threat intelligence solutions for Fortune 1000 and cyber-security companies. TIP is part of the Whois API Inc. family which is a trusted intelligence vendor by over 50,000 clients.