In the first six months of this year, Google received seven wiretap orders from the United States government and complied with all of them. The company also received 207 pen register requests in the same period and complied with 89 percent of them, according to Google’s new transparency report.

The company’s latest report reveals a fairly dramatic increase in the volume of user data requests from the U.S. government since the beginning of 2010. In the first half of that year, Google received 4,287 requests for user data. In the latest reporting period, the company got 10,918 requests. However, the percentage of requests that Google complies with has been dropping over time, with the company providing some data in 94 percent of requests in the second half of 2010 and 83 percent in the first half of 2013. Overall, requests from all governments have more than doubled since 2010.

Google is one of a growing number of companies that have decided to publish information about the number and kind of requests they get from law enforcement agencies for user data. Those requests can run the gamut from simple data about the account all the way up to a wiretap that gives law enforcement access to the full content of a user’s communications in real time. Twitter, Facebook, Microsoft and several other companies have taken to publishing these reports, which have become all the more significant in the last six months as the revelations of the NSA’s surveillance methods have accumulated.

Several of those companies have petitioned the Foreign Intelligence Surveillance Court for permission to provide more information on the volume of National Security Letters they receive. Right now, they’re only allowed to reveal those requests in ranges of 1,000. NSLs are sent by the FBI in national security investigations and force companies to reveal detailed information about a user’s account, including name, address and how long they’ve had an account. Google officials said the company is continuing to petition the government for the ability to provide more data. 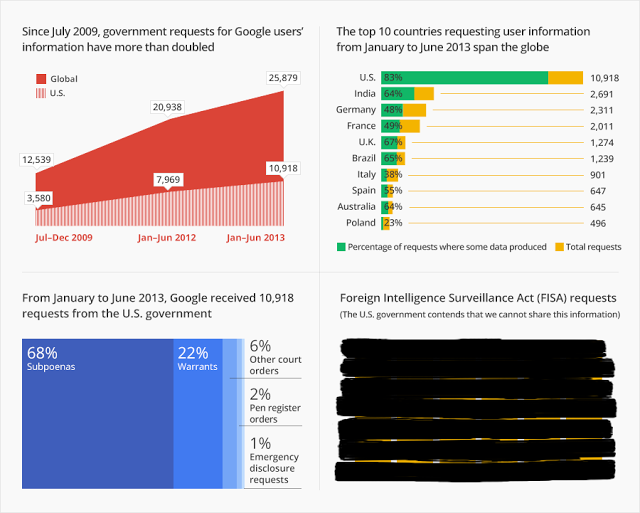 “We believe it’s your right to know what kinds of requests and how many each government is making of us and other companies. However, the U.S. Department of Justice contends that U.S. law does not allow us to share information about some national security requests that we might receive. Specifically, the U.S. government argues that we cannot share information about the requests we receive (if any) under the Foreign Intelligence Surveillance Act. But you deserve to know,” saidRichard Salgado, legal director, law enforcement and information security, at Google.

“Earlier this year, we brought a federal case to assert that we do indeed have the right to shine more light on the FISA process. In addition, we recently wrote a letter of support (PDF) for two pieces of legislation currently proposed in the U.S. Congress. And we’re asking governments around the world to uphold international legal agreements that respect the laws of different countries and guarantee standards for due process are met.”

This is the first transparency report from Google that has included the volume of wiretap requests, pen register orders and other court orders the company has received. Wiretaps are the most difficult kind of order for law enforcement agencies to get because they provide the most detailed information about the target. There’s no indication in the Google report about which services the seven wiretap orders covered.